Pedro Patrício has co-authored a paper entitled "Undulation Instabilities in the Meniscus of Smectic Membranes", which was published online by Physical Review Letters on 18 March. This is the result of a collaboration between the CFTC researcher and the experimental group of J.C.Loudet, P.V. Dolganov, H. Saadaoui and P. Cluzeau, at the "Centre de Recherche Paul Pascal" of Bordeaux.

The Letter describes the undulated structures which appear in the meniscus of freestanding ferroelectric smectic-C* (SmC*) liquid crystal films. The undulations of the c-director had been previously observed (see [1] for a review). Using optical microscopy, phase shifting interferometry, and atomic force microscopy (for the first time in a free suspended film), it was now demonstrated that these periodic structures correspond also to undulations of the smectic-air interface. Moreover, the resulting striped pattern disappears in the untilted smectic-A (SmA) phase.

Figure 1: Optical photographs showing the evolution of the meniscus struc­ture with temperature. (a) SmC* phase, (b) still in the SmC* phase, (c) just above the bulk SmC*-smA phase transition. (d) deep in the SmA phase. 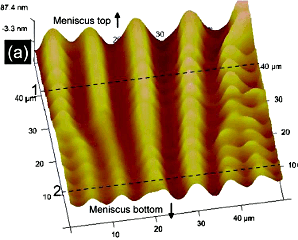 Figure 2: (a) Atomic force microscopy image of the meniscus of a SmC* film in the stripes region.

The wrinkles in smectic-C* menisci are explained in terms of the undulation instability of the smectic layers caused by a dilational mechanical stress, induced by the strong anchoring conditions of the LC material at the ring border, which favour a smectic-A alignment, and a consequent increase of the layer thickness. This undulation instability may explain the existence of director splay domains without invoking surface-induced spontaneous polarization, as proposed earlier [1,2]. The model predicts an undulation wavelength increase with the thickness of the meniscus, which is in line with the experimental trend in Fig. 1 and that reported in [1]. The dilation is greater in thicker parts of the meniscus because more layers are involved.